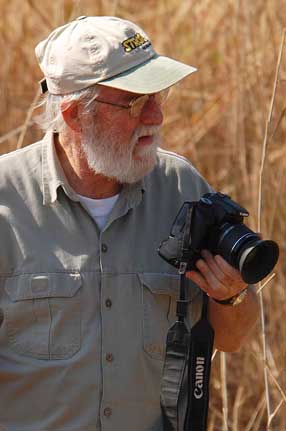 Name’s Scotch Macaskill (it’s a nickname – real name Andrew), the photographer and publisher of African Reference Photos. I live in Curry’s Post, a rural hamlet in the Natal Midlands, about 130 km from the city of Durban, South Africa.

Although I originally studied law at the University of Natal, Pietermaritzburg, a few years of practice as an attorney convinced me that law was not for me – too confrontational – so I bailed out and opted for photojournalism.

Then more study, this time a three-year Photography Diploma at Natal Technikon.


I subsequently worked on newspapers and magazines in South Africa and Australia as a photographer and sub-editor, then tried my hand as a commercial photographer before working for about 10 years as communications manager for a safari clothing company.

My interest in wildlife and wildlife photography has developed in tandem with travels to some of Africa’s great parks and nature reserves.

I am not a professional wildlife photographer; all my photographs have been taken while on safari with friends who have been kind enough to let me tag along.

That means I'm in a game drive vehicle with six to eight other people, not necessarily photographers, so I have to grab whatever images I can, usually with run-of-the mill equipment.

I am under no illusions about my photos - most don't make the grade as top class wildlife images. I do believe, however, that they can provide a great resource for artists needing reference photos of African animals taken in the wild, in their natural habitat.


And that's the rationale behind African Reference Photos - to be the very best source of African reference imagery at an affordable price.
Please visit my Facebook page for news and posts about wildlife art, artists, conservation, and also updates or alerts regarding the website.